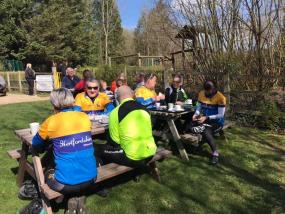 Our first off road club run of the Spring was fortunately greeted by a nice dry day, partly sunny, partly cloudy, with only a light wind. Eight Wheelers turned out for a tour of the bridleways and small lanes around Cold Christmas, Much Hadham, Nether Street, Green Tye, Standon Lodge Farm to our tea stop at Something Lovely in Puckeridge. Return via Old Hall Green, Levens Green, Sacombe Park, Rickneys Quarry where all participants successfully completed the quarry hill challenge. The quarry did claim two puncture victims however, one of whom had no spare tube for his new hybrid bike and no one else had a compatible tube either. So a repair had to be carried out the old fashioned way involving things called sandpaper, glue and patch. Back to Ware through Bengeo and Ware Park with no further incident. 36 miles.

The 5's & 6's met up in Hertford where we were delayed slightly because we had to explain to Tony how to distinguish between his left & right foot (I kid you not!!!).  That done, four of us took off up Port Hill on our way to Flint Cross.  Mainly following lanes we took a hilly(ish) route via Buntingford, Brent Pelham & Chrishall before the long descent to our destination.  The route back was the direct one via the B1368.  The weather made it a good day to be riding and we encountered neither problems nor issues en route.

After an aborted attempt a few weeks ago, the Cat 3 group finally reached Paradise. Contrary to widely held beliefs, this turns out to be in Great Dunmow and majors more on bacon sandwiches than harps and clouds - so that's something to look forward to. We can also report that the trip to Paradise is full of joy with blue, skies, sunshine and a tail wind. For those not certain of their personal route to Paradise we can advise that you go via Bishops Stortford, Elsenham, Mole Hill Green and Little Easton.

Eight of us made the trip and found - again contrary to popular belief - that it is possible to return from Paradise and that this can be achieved via Great Canfield, Spellbrook and Widford. The return was a little harder as, while the weather gods permitted further sunshine, they substituted a head wind for the tail wind. Nevertheless a good pace was maintained - rather too good for the leader who struggled at times - but that is what happens when Tony H returns from his hols. No punctures and no lost souls along the way.

What a lovely day to go on a nice undulating ride to Shenley. Nine magical people arrived at Hertford, all raring to go. Me, well that’s another story after feeling a little under the weather. We set off at a good pace with no issues and everyone chatting. It was nice to meet Roger out on his first ride with the club. We got to the cafe in good time, and the food and service as normal was superb.
On the way home I started to feel a little rough - understatement of the year - and Bob, Mike and Marcia realised something was wrong. Mike took over the lead and Bob and Marcia hung back with me. Only 10 miles to go, and I was a totally spent force! Marcia then helped me up a hill by pushing me by hand - thank you! Bob stayed with me, and near the end we regrouped. Thanks to all for bearing with me. Next time I’m ill I won’t come out. I didn’t want to let the Cat 6 down .

No mechanicals or punctures. Just one ill leader.