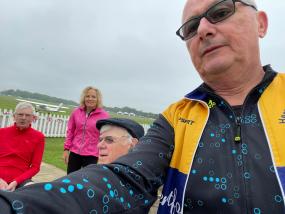 Cat 6 at the only airport without queues

It was the day after the celebrations and only four Wheelers turned up for the category 6, and only a handful for the 3’s and 4’s. I couldn’t believe it!

At 9.32 the four warriors set off: Ian Smith, Davina Gutteridge, David Smith and myself. This was a hilly 40 miler down to Stapleford Airfield, but no one grumbled and on the way, we only had one slipped chain. We got to the Cafe at 11.40 and it was empty. Oh and no rain yet! So we sat outside and enjoyed the food. Service was speedy and the food was lovely.

We set off back after a little chat and still no rain! However, after fifteen minutes, there was a light precipitation for about ten minutes and then it stopped. Well, when I say rain, it was a heavy mist really! After a few hills, we got to the Epping Road hill, then half way up my chain slipped off. David gave me a hand and we were off again. No more hills and a nice ride back to Ware, with surprisingly No Rain. All in all a nice hilly ride.

Did i tell you there was hardly any rain today? Obviously written on the throne.

Over and out. Love and kisses.

Two started but only one made it to the café.

The day was hardly flaming June but it was mostly dry - no need for waterproofs apart from a brief stretch around Baldock. There was evidence of heavy downpours in some places though - flooded roads between Wheathampstead and Codicote for example.

Sadly our companionable progress was terminated at the bottom of the climb to St Paul's Warden when Graeme punctured. The self sealing tubeless tyre chose not to - despite Graeme's best efforts and muttered imprecations against the whole concept of tubeless tyres and anyone involved in their manufacture. After finally managing to prise the tyre from the rim (more imprecations) and washing away about half a pint of goo we tried a tube. Graeme's seriously mini mini-pump now showed its strength by shearing off end of the valve. How we laughed!

Graeme now resorted to the Hill domestic rescue service while Graham continued on and enjoyed an excellent slab of carrot cake at the Brewhouse Café in Wheathampstead.

There was quite a build up to this club run. Would the biblical storms that were forecast scupper our ride; would we make it through the villages with their closed roads, celebrating the Jubilee with their parties, and would the Heydon 5k test climb (so called by Strava) push cat 4 to their limit?

With all these challenges ahead, five of the hardiest Cat 4 legends stepped up. I pushed cat 4’s advised 40-60 miles distance to the limit and so we rode off on a 60 mile, 3000ft climb to Hot Numbers Roastery just outside Shepreth.

It was a fairly uneventful journey out apart from the lead rider missing two turns (too busy chatting with Captain of Cat 4, Peter). Both times Alex came to the rescue and earned himself ‘Wheeler of the Week’ for this!

Needing to redeem myself with a much more impressive cafe stop than the previous Poppy’s experience, Hot Numbers didn’t let me down (all credit to Enzo for finding this little gem). It even had lots of espresso options for Elio so I couldn’t fail!!

On our return we encountered our only Jubilee party, in Buntingford. Ian, fortified with maple syrup pancakes prepared to line his bike up, ready to ride through the celebrations. Concerned he would reach the end of the high street festooned in bunting and laden with fairy cakes we manhandled him around a short diversion.

Somewhere around Great Munden my leadership skills deserted me and I lost two legends to a puncture whilst the man full of maple syrup pancakes roared off rather impressively up an extremely steep hill.

Three of us arrived back at Allenburys, only slightly damp from the biblical drizzle, with Peter and Alex not too far behind after the puncture had been repaired.

We all commented on how quiet the roads were; I think four days of celebrating the Jubilee weekend had finally taken its toll on the residents of Hertfordshire.