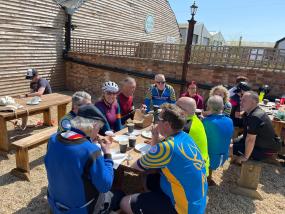 Well it was a beautiful sunny spring morning when myself, Pete and Rebecca arrived from Ware to find a few Cat 6 riders already there ready to go. Slowly the numbers increased to eventually a cracking 16 eager riders. A big warm welcome to Julian and Amanda. Also nice to see Martin there - haven’t seen him for a while. And Grace and Matt on his new bike and recently completed PhD - congratulations.

So on time we set off up Bramfield Road.

After last week with Tony blowing his trumpet about the KC, this week he was blowing out of his …… - in fact being overtaken on the hills by David on his 15 speed bike. Good one, David. Tony, you are excused as you did do the Surrey Hills the day before - all credit to you and Rebecca on that.

Mostly uneventful ride out where we could all admire Kev's (Richard’s) new Ale outfit. Very colour coordinated (except for the shoes - work needed there, Rebecca)

Poor Daniel had a chain mishap - more on that later, and Davina tried to lead a group on a short cut. Not allowed, I’m afraid!

The cafe was excellent - great service, great food and Adrian’s slice of cake was something to see - twice the size of Graham’s.

All fed and watered we set off and Daniel’s bike issues really starting to wreak havoc. Basically, it appears that poor bike maintenance meant everything was coming undone and causing problems. The good news is he got back safely and all issues resolved now.

Oh and we got banned from a pub without even going in!

Ride back to Hertford completed - although Julian and Graham decided they didn’t like my route or they missed the turn.

Beautiful sunshine but with the whiff of tar and loose chippings in the air. The chipping forecast warned us away from Fanhams so we elected for Cold Christmas. However, the chippers had got there first and closed that road. So it was through Wadesmill and across to Barwick Ford. I had been keen to avoid the hill out of Wadesmill, which I dislike intensely. This occasion was as bad as any with all five of my Cat 3 companions disappearing into the distance. Fortunately, after a couple of miles, they noted the absence of their leader and paused for him to catch up. Thereafter we proceeded in the normal Cat 3 style through Stortford and Elsenham. We then took the quieter roads through Brick End and Lindsell enjoying the beautiful May countryside. Our peaceful progress was destroyed on the B1057 where we were assaulted by about 20 motor-cyclists, presumably en route to Finchingfield, who apparently got their kicks by passing close and making lots of noise. Fortunately all was quiet by the time we reached Bardfield where we enjoyed cake etc. in Coles Café.

The return was via Thaxted and Newport at, to my relief, a slightly reduced pace. Back to Ware by 2.30.