Wheelers' have a busy TT week - and a new club record!

Wheelers' have a busy TT week - and a new club record! 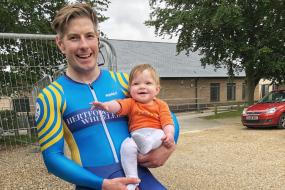 Two Hertfordshire Wheelers made an early start on Sunday 23rd June. They collected their race numbers at 4am and soon each was flagged off in a race that would be a tremendous test of their mental and physical endurance. The event was the Eastern Counties Cycling Association 100-mile time trial run on Sunday 23 rd over a route in Cambridgeshire and Wheeler Gareth Wignall smashed the club’s 100-mile time trial record that had stood for 32 years. Wignall recorded a time of 3hrs 58mins 34secs beating the 1987 Herts Wheelers club record by a huge 12 minutes and 51 seconds and achieving an average speed of over 25mph for the hundred miles! Gareth commented after the event that his objective had been to record a time under four hours, so he was happy to have done that, but now needs to work hard on his pacing to improve his time. The club scored another success in the event with Yiannis Gopoulos in his first year of time trialling recording a time of 4hours 47minutes 59seconds and being awarded second place in the handicap event, a splendid achievement in his first ever 100-mile time trial. Three days later Gareth was in action again defending his hold on the club’s Garrett Cup - a club challenge over 25 miles which this year took place on an event organised by Whitewebbs Cycling Club on the A10. Finishing third in the event with a time of 57mins 16secs he was the fastest Hertfordshire Wheeler home, retaining his trophy over Lee Mason and Peter Walton, the second and third club members home. Also flying the family flag was Bri Wignall who was the only female entrant and returned a time of 1hr 30mins 52secs for her first 25-mile time trial. If all that was not enough, Lee Mason and Gareth Wignall were out again the next day competing in a 10-mile time trial organised by the Cambridge Cycling Club. As is often the way with cycling, the wind never blows the right way. The riders had a tail wind for just the first 4 miles, before turning and suffering a head wind for a long 6 miles. Nonetheless Lee Mason set a new 10 mile PB, 23mins 49secs, while Gareth achieved his best 10-mile time of the season, finishing in 21mins 3secs. (Photo: GnBri Photography)